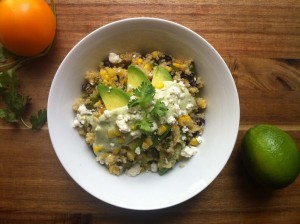 As the summer continues, you have probably noticed the trend of some less “stove intensive” meals. Today’s recipe is no exception. I came across it on the flourishingfoodie.com.

I was first drawn to the recipe by the grilled corn and poblano peppers. The charred skin on the peppers and the grilled corn kernels looked delicious. Fortunately, the taste did not disappoint either!

The recipe involves quinoa, which is a seed that can be prepared like a grain, such as rice. These protein packed little seeds are a perfect addition for our salad nights. This recipe has lots of great fresh summer flavors and is complimented by a creamy cilantro lime dressing. 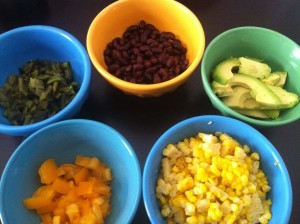 Garnish:
I began by boiling a large pot of water for the corn. While I waited for the water to boil I started grilling the poblanos. 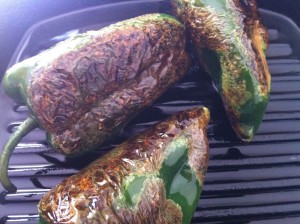 In a lightly oiled grilling pan I placed 3 small poblano peppers on medium low heat. I turned the peppers often with a pair of tongs, until all sides were well blackened. Once the peppers were blackened I placed them in a glass bowl and covered the top with plastic wrap to help loosen the skin for 5 minutes.
After 5 minutes I removed the plastic wrap and allowed the peppers to fully cool.
Once the water was boiling I shucked and rinsed 3 ears of corn. I broke each cob of corn in half and placed them into the boiling water for 5 minutes. I placed the corn on a clean dish towel to absorb any excess water. 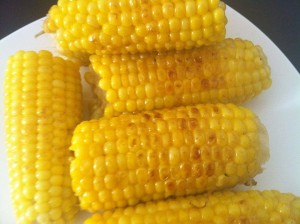 I carefully placed the corn pieces into a lightly oiled grill pan on medium low heat. I turned the corn with tongs until the corn was just starting to get grill marks. I set the corn aside to cool.
Once the vegetables were cooled I peeled the skin off of the poblanos. I cut off the stems and removed the seeds. I then finely chopped the peppers and set them aside.
Then I carefully cut the corn kernels off the cobs and set it aside for later.

I rinsed 1 cup of dried quinoa and placed it into a medium sized pot with two cups of water. Make sure to give the quinoa a good rinse before cooking to remove the naturally bitter coating. I brought the water to a boil. Once boiling I reduced the heat to low, and simmered until all the water was absorbed.
While the quinoa was cooking I started the dressing. 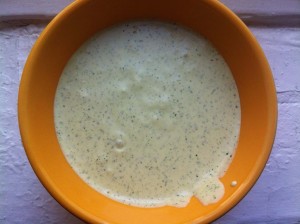 In a blender I added 1 cup of fresh cilantro leaves, 1 cup of greek yogurt, 1/2 of a cup of olive oil, 1 teaspoon of honey, 1 teaspoon of hot sauce, the juice of one lime, and salt and pepper to taste.
I blended this mixture together for 2 minutes until nicely combined.
Once the quinoa was cooked I fluffed it with a fork and allowed it to cool slightly. 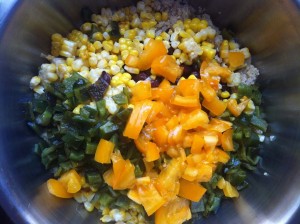 In a large bowl I added quinoa, corn, chopped poblanos, 1 cup of black beans, and 2 tomatoes chopped, and 1 avacado sliced. I gently tossed this together.
I dished up the salad and topped it off with the cilantro lime sauce and some crumbled queso fresco. 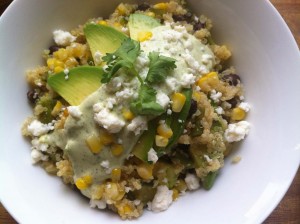 This is such refreshing salad. The grilled corn, poblano peppers, and avocado are perfect for summer. The black beans and quinoa add some body, while the tomatoes provide bursts of fresh flavor. The whole mix blends well with the creamy and bright flavored cilantro lime dressing.