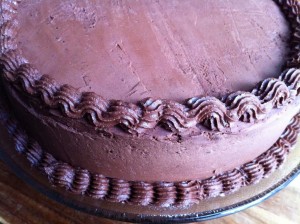 One of the great things about birthdays is that there is often some type of cake involved. Greater still, on one’s own birthday, you get to choose the cake! So of course I chose my favorite chocolate cake… the Brooklyn Blackout Cake. It is a rather magical dessert. It consists of moist layers of devils food cake, then each layer gets spread with a rich creamy chocolate pudding, and the whole cake gets spread with a creamy chocolate frosting. To top it off you usually find some added cake crumbs spread around for good measure. 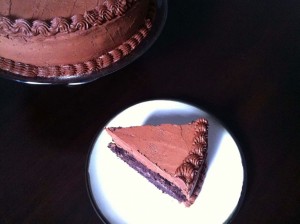 There are many recipes that you can find on this classic originating in Brooklyn. I went with this recipe from bisousatoi.com. I skipped the added cake crumbs this time around. This cake turned out wonderfully and made for the perfect ending to a great birthday!

I began by preheating the oven to 350 degrees and greased two 9 inch cake pans.
Over the mixer bowl I sifted in 1 1/2 cups of flour, 1 cup of cocoa powder, 1 1/2 teaspoons of baking powder, 1 1/2 teaspoons of baking soda, and 1 teaspoon of salt.
Then I used the paddle attachment and mixed in 2 cups of sugar. I mixed until incorporated.
In a medium bowl I whisked together 2 eggs, 1 egg yolk, 1 cup of buttermilk, 1/2 of a cup of melted butter, and 2 teaspoons of vanilla extract.
Then I slowly added the egg mixture to the flour mixture and mixed until incorporated. I stopped the mixer and scraped down the bowl to make sure everything was well combined.
I slowly added in 1 cup of warm coffee and mixed until just incorporated.
Then I evenly divided the batter between the two cake pans and baked the cakes for 35 minutes and a toothpick came out clean.
While the cakes cooled on the cooling rack I started on the chocolate filling.

In a large heatproof glass bowl I whisked together 4 large egg yolks, 2/3 of a cup of sugar, 1/8 of a teaspoon of salt, and 2 tablespoons plus 1/2 of a teaspoon of sifted cornstarch. I mixed until combined and pale yellow in color.
In a medium saucepan I added 1 cup of water and 2/3 of a cup of heavy cream and brought the mixture to a boil over medium heat.
Once the milk began to boil I removed it from the heat. Whisking constantly I carefully added the warm milk to the egg mixture in a slow and steady stream.
Then I poured the milk mixture back into the saucepan, on medium heat until boiling. I made sure to stir constantly.
Once the milk mixture was boiling I continued stirring until thickened.
I removed the thickened cream from the heat and stirred in 3 ounces of semi sweet chocolate chips, and 1 tablespoon of butter. I stirred until the chocolate and butter had completely melted.
Then over a medium heat proof glass bowl I passed the chocolate filling through a fine mesh sieve. I stirred in 1 teaspoon of vanilla extract.
Lastly I placed a piece of plastic wrap directly on the pudding and placed it in the refrigerator to fully cool.

While the cakes and pudding were cooling I started the frosting.
In a medium pot filled halfway with water I placed a heatproof glass bowl on top to make a double boiler. I brought the water to a light simmer over medium low heat.
I placed 4 ounces of unsweetened chocolate into the glass bowl and stirred until fully melted. Once melted I carefully removed the chocolate from the heat and allowed it to cool.
In the mixer bowl I beat 11 tablespoons of butter until creamy. Once the butter was creamy I added in 1 2/3 cups of confectioner sugar. I mixed until well combined and smooth.
Then I added in 2 teaspoons of vanilla extract until incorporated. I slowly added in the cooled and melted chocolate. I mixed until well combined and fluffy.
To Assemble I placed down one cake on a cake stand. Then I added a generous amount of the pudding. I gently placed the second cake on top of the pudding. Lastly I frosted and decorated the cake.

One Response to "Brooklyn Blackout Cake"