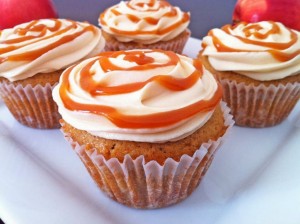 Ah a dessert dilemma, perhaps the best of all dilemmas to have or so I think. Still feeling the fall spirit I really wanted to bake up something apple-y and delicious. So Matthew and I tossed around a few ideas. He was thinking a nice apple pie or caramel apples and I was thinking cupcakes, we weren’t exactly on the same page here hehe. So when I spotted this caramel apple pie cupcake I knew it was a win, win.

This may just be one of the easiest ways to eat apple pie and it’s every bit as delicious! The rich caramel sauce really takes this cupcake to the next level. At one point I had to make sure that their were no utensils within close range of the caramel sauce when it wasn’t in use for the recipe otherwise I kept sneaking spoonfuls. 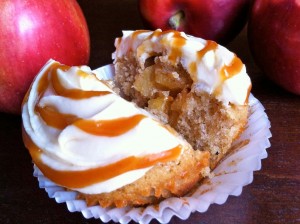 The fresh apple and caramel filling surround by a moist spiced caked topped with a rich and creamy layer of caramel cream cheese butter cream and drizzled with an extra touch of caramel sauce. These cupcakes were a fantastic compromise and a fun play on the apple pie.

I began by preheating the oven to 350 degrees and lining my muffin tin with paper liners.
In the mixer bowl I added 3/4 of a cup of coconut oil, 1/2 of a cup of brown sugar, and 1/4 of a cup of sugar. I mixed until combined.
Then I added in 2 eggs and 1 teaspoon of vanilla extract. I mixed until incorporated.
In a separate bowl I mixed together 2 cups of flour, 1/2 teaspoon of baking powder, 1/3 of a teaspoon of baking soda, 1/2 teaspoon of salt, 1/2 teaspoon of cinnamon, 1/4 of a teaspoon of ground nutmeg, and 1/4 of a teaspoon of ground cloves.
Then I added the flour mixture in 3 equal parts and the 1 cup of apple juice in two equal parts until just combined, making sure not to over mix the batter. I stopped the mixer and scraped down the bowl before each new addition.
I scooped the batter into the muffin tin and baked the cupcakes for 15 minutes and a toothpick inserted in the center came out clean.
While the cupcakes cooled on a cooling rack I started on the caramel. Use caution as the caramel is extremely hot and can spit and steam.

In a medium sauce pan I added 1 cup of sugar on medium high heat and whisked constantly until it started to melt and turn golden brown. About 5 minutes.
Then I removed the sauce pan from the heat and added 1 pinch of sea salt and I used caution as the sugar will foam up and their will be steam I added 6 tablespoons of butter, I whisked until the butter melted.
I returned the sauce pan back to the stove and slowly and carefully added in 2/3 of a cup of heavy cream on medium low heat, I whisked until it was uniform in color. I cooked it for 1 minute whisking constantly.
I removed the caramel from the heat and placed it in a heat safe glass bowl. I let the caramel stand for 15 minutes.
Caramel Apple Filling:
In a medium sauce pan I added 2 cups of finely cubed apples and 2 tablespoons of apple juice. I cooked the apples for 10 minutes stirring frequently.
I removed the apples from the heat and placed them in a glass heat proof bowl. I mixed in 1/2 of a cup of caramel and placed the apple mixture into the refrigerator to cool.

In the mixer bowl I creamed together 1/2 of a cup of unsalted butter and 8 ounces of cream cheese.
I added 5 cups confectioners sugar one cup at a time until well combined and smooth, I made sure
to stop the mixer and scrape down the bowl.
Then I added 1/4 of a cup of caramel and mixed until incorporated and the frosting was smooth and fluffy.
For assembly, using a pairing knife I cut out a small round in the center.
I then filled the cupcakes with the caramel apple filling. 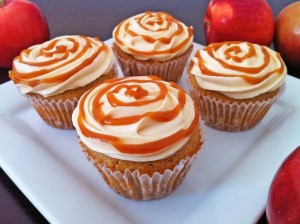 I replaced the tops and frosted the cupcakes. Then I finished each cupcake off with a caramel swirl, because this caramel sauce is just so good.