Thanksgiving is just a few days away and in continuing the theme from my last post (green bean casserole) I mentioned that I would be talking about a few dishes that would be making an appearance on our table this year.

One very important part of our table is the main dish which consists of a lovely browned and golden bird. Almost as important as cooking a great bird is tending to and getting the most out of the prized drippings that are left.

Because I was already going to be spending a good amount of time in the kitchen I decided to save myself a few extra dishes and I chopped up a few potatoes and some onions and arranged them around the roasting pan towards the last hour and a half of cooking so they could get nice and tender and absorb some great flavor. 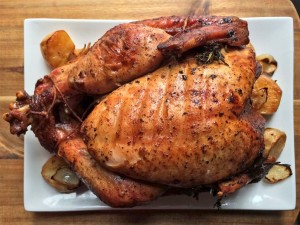 I saw a great turkey and gravy recipe on simplyrecipes.com. I was intrigued with cooking the bird breast side down. Both Matthew and I really enjoyed the end results; as the turkey was very moist and the gravy was utterly delicious.

When handling raw turkey use a good amount of caution. Use a separate cutting board and utensils to avoid contaminating other foods. Wash your hands with soap before touching anything else in the kitchen. Use paper towels to clean up.

I removed my thawed turkey from the refrigerator and brought it to room temperature with its plastic wrapping still on. I made sure to keep the turkey in a pan both in and out of the refrigerator in case of any leaks.

I positioned the oven rack in the bottom third of the oven and preheated the oven to 400 degrees.

Then I removed the plastic packaging, the neck, and the bag of giblets. I double checked the body and neck cavity to make sure I didn’t forget anything. I rinsed the turkey both inside and out under cool water and patted it dry with paper towels.

I decided to truss the bird to keep the limbs from flopping around. I used a cotton cooking twine to tie the legs together and held close to the body. Then I tied the string around the body of the turkey to hold the wings in close. I folded the neck flap under the bottom of the bird and secured it when I had tied up the wings.

I placed several sprigs of rosemary and thyme around the legs on the bird. Then I placed the turkey into the oven for 30 minutes at 400 degrees. Check the cooking directions listed on your turkey packaging.

While the turkey was cooking I prepared the vegetables.

I removed the turkey from the oven once it had reached safe and proper temperatures both in the thigh and the breast meat, and I checked that the juices ran clear. In total it took about 4 hours. I found Butterball has a turkey calculator  that comes in handy when deciding how much turkey you will need, thaw times, and cook times.

Then I gently covered the cooked turkey with a piece of aluminium foil and let it rest for about 15 minutes before I carved it.

While the turkey was resting I checked to make sure the potatoes were cooked and fork tender. Then I placed the vegetables on a glass serving dish.Then I started on the gravy.

Gravy Ingredients:
After the turkey had been removed from the roasting pan I scraped all the drippings off the bottom of the pan. I removed the excess fat from the drippings.
I placed 2 tablespoons of drippings in a medium sized sauce pan. Then I added 2 tablespoons of flour and whisked until thickened over medium high heat. I continued to brown the flour for about 1 minute.
Then I slowly whisked in some additional drippings, 1 3/4 of a cup of chicken broth, and 1/4 of a cup of cream. I stirred until the sauce had thickened and was smooth.
I added a small amount of salt and pepper to taste.